This isn’t the first time that someone has suggested Sage like to copy KashFlow’s marketing activities. Given that Sage are often (supposedly derogatively) referred to as a marketing machine instead of a technology company, I’ve always taken it as a compliment.

There have been a few things they’ve done recently that look like they’ve taken a degree of ‘inspiration’ from what we do, but I dismissed it as coincidence.

Then, last week, they released this video introducing their low-functionality SageOne product.

As I watched it, I was struck by the similarities to the intro video on our home page.
From 2D people “unfolding” from the ground, to speech bubbles coming out of crowds  – even the use of the “[there is now] a better way” line that we’ve been using for a while (including in our video).

I was still willing to put it down to coincidence…until I saw the part of their video in which the SageOne logo develops arrows that spin around like KashFlow’s do in our video. SageOne doesn’t even have arrows in their logo!

Maybe I’m paranoid and it’s all just a big coincidence, or maybe – just maybe – someone in the Sage marketing department doesn’t have an ounce of their own creativity, and has decided to steal it from a startup instead… 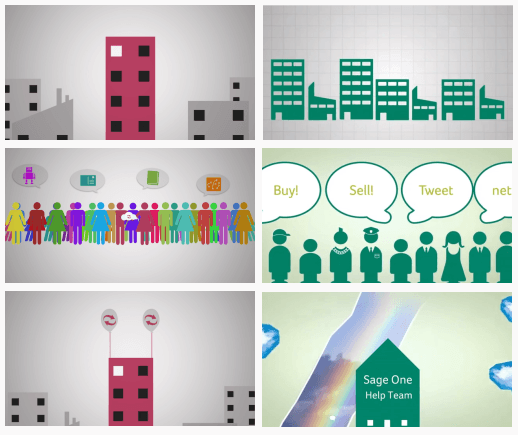