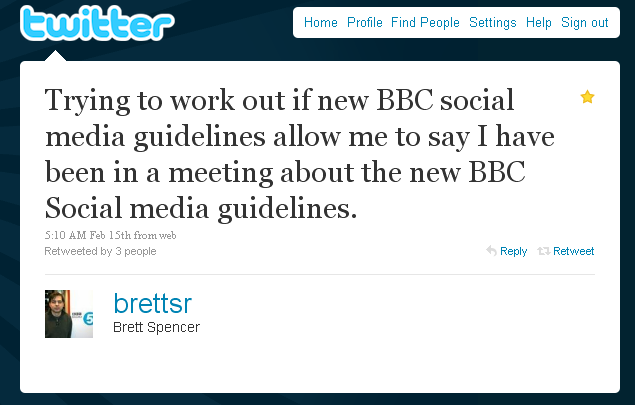 A few months back, we completely revised the way we handled social media. The closest thing we’d ever had to a social media policy was (or at least can be translated from its original, cruder form as…) ‘don’t be stupid.’ If you have to think about whether or not posting something is a good idea, it’s probably not. Previously, a small unit of us tweeted occasionally, signing off as individuals – in my case, for example, I’d end tweets with ^SB. The reasons we did this were simple – it’s what a lot of big companies do, and we thought that it added a human touch by reminding tweeters who they were talking to.

However, when we thought about it a bit, we realised that this technique probably wasn’t the right one for us – we aren’t a megacorp that needs 17 people manning our Twitter account 24 hours a day. Plus, more importantly, it doesn’t really make sense to accentuate the fact that individuals are tweeting on behalf of the company – ideally the voice should be consistent enough that you don’t know who’s tweeting. A couple of good examples of this are the feeds from Monster Energy and Innocent Smoothies – their tweets could be posted by any number of people, but they all look like they’re posted by the same voice. Because that voice is disassociated from any one individual, it helps to reinforce the idea that the company has a voice of its own. Aside from anything else, this creates a sort of shield – in the same way that people are often more critical of companies and brands than they would be of individuals, this can potentially give employees the chance to be a bit more mischievous and playful.

‘Why does creating a voice matter?’ I hear you cry. While it’s all well and good to bring in a community manager to handle social media, blogging etc, you need to have a plan in place for if they decide to leave – even if the impact Twitter, Facebook, Youtube etc have on your business is only a relatively small one, its absence will have an impact on referrals, brand awareness etc generated from these sources but also on your existing customers – if something that has previously been very active suddenly goes silent, it doesn’t reflect well on your brand.

Generally speaking, the act of opening the door to allowing other members of staff to tweet from the company account is what necessitates the creation of a social media policy. Fortunately, we’ve managed to avoid that trap – nothing kills a funny or interesting tweet like forcing it through the policy blender. It’s worth noting that flexibility and a willingness to shirk the norm can sometimes lead to mainstream media coverage. Rather than creating an arduous policy, we came up with a few ‘Yes and No’ examples of how to respond to tweets. I’ve shared a couple below – enjoy being some of the first people outside the company to see them…

–       Always refer to customers by their name

Yes: Sure thing, John. Sorry for the inconvenience, and thanks for letting us know!

–       Laid back, witty, approach to talking to our customers, puns, sarcasm, jokes.

Jim: I love KashFlow! It makes my life complete. I want to marry it.

Yes: Glad you love the software, Jimbo, but unfortunately it’s already seeing somebody. It would love to stay friends though.

No: You can’t marry the software, Jim. It’s an inanimate object.

Yes: Hope that’s all sorted out for you now! Feel free to drop the support team a line if you have any more problems, and we’ll be happy to help!

If you’re looking at the above and thinking ‘but all of that’s completely obvious!’, then I’ve succeeded – keeping a consistent tone isn’t, and shouldn’t be, rocket science. A few pointers should be enough, then you can refine as you go along. Of course, there are some intricacies to creating and implementing a tone of voice for a company and, admittedly, there are too many to outline in a single blog post. Maybe I’ll write a book one day…I just have to pick what voice to do it in.