Today we shared an advert that we were stopped from running by a publisher. It prompted some conversation about marketing and a comment was made along the lines of “it’s not clever to exclude half the population in your advertising”

Putting aside for a moment the fact that we could be excluding/putting off people due to offending them in this specific case and looking at the statement more generally, I totally disagree with it.

In fact i’d go further, tell 80% of the people that see your advert that what you’re selling isn’t for them. Way in excess of 95% of people that see an advert in print are never going to act on it anyway.

We’ve used that line in our advertising and would gladly do so again. There are many businesses using KashFlow with turnovers up to and beyond £15m and it’s a great tool for them. But a large chunk of our customers are in the <500k bracket.

Put yourself in the shoes of a small business owner (with a turnover of <500k) reading that advert. It’s telling you that this isn’t some generic one-size-fits-all solution. It a product specifically made for your category of business so will therefore be a better fit. That’s much more compelling.

Assuming the advert is appropriately placed then the increased engagement from those readers far outweighs the loss of the readers with a >500k turnover.

By trying to catch everyone that sees your advert you are diluting your message and quite possibly getting less responses as a result. Even if your product doesn’t target a specific niche, your advertising might perform better if it does.

It’s not all upside though. What about people that have ambitions to grow beyond 500k? They could be put off thinking they’ll quickly outgrow it. And we’ve had occasions where staff have repeated the line to potential customers that have a higher turnover and put them off. It’s a message to be used in a mass medium to focus and enhance appeal, not a real-world exclusion.

You’ve been kind enough to read this far, so I’ll share the “banned” advert: 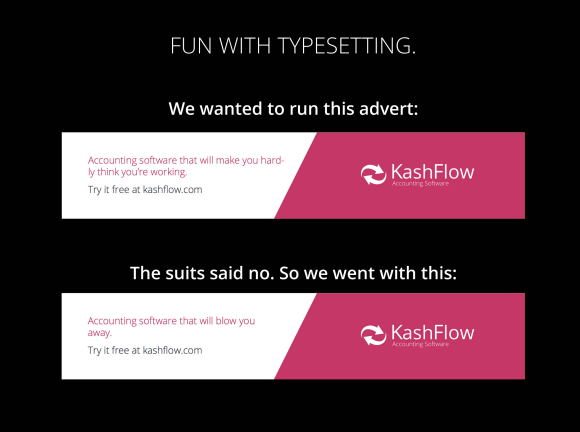 The intention here isn’t to do anything like what I’m talking about in this post. The advert is intended to grab attention, show that we’re human, like to have a laugh and are the complete antithesis of the stuffy old world of accounting software.