The last few months have been an exciting time here at the KashFlow headquarters and along with brilliant new updates to our feature packed software package, there has also been a renewed determination to help as many small businesses as possible.

Our easy accounting and bookkeeping software speaks for itself in how it helps business owners and managers take control of their accounts. 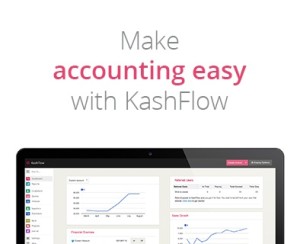 But reaching the thousands of business owners out there who can really benefit from using KashFlow, can be a challenge, especially in the noisy world of digital where there is a constant bombardment of companies trying to sell stuff to the same market. Social media has also turned people increasingly sceptical of anything being promoted or advertised, since it seems that anyone with a computer can promote their product no matter how little it value it has.

So we decided to try something…traditional, by reaching out via the medium of radio.

The UK loves radio: According to the Radio Advertising Bureau record audiences of 48 million (91%) of adults listen to radio every week for an average of 21 hours, with nearly 35 million tuning in to the commercial sector alone. A recent study has also shown that radio is still the UK’s second most-consumed medium after TV, accounting for over a quarter of the average adult’s time spent with media across the day.

For KashFlow, radio advertising presented a number of new challenges, and here are a few things we learned:

Script writing is a skill: Maybe it’s because so much emphasis is placed on getting messages across in 140 characters and less, but the task of writing a full script was daunting. Our first thoughts were to somehow take listeners on a journey that individual business owners could identify with, but we soon hit a wall on how to do that. We worked in partnership with the team from Red Apple Creative, who (luckily for us) have much more experience with radio script writing than we do. They came up with some ideas, which meant that instead of working from a blank canvass, we had some tangible ideas to play with. Having said that…

Squeezing everything into 30 seconds is hard: It’s more than 140 characters yes, but how do you tell a story, make an impression and still communicate where people can find you in 30 seconds? Even with early version scripts already drafted, trying to fit the KashFlow call-to-action and core messaging into the time it takes to change your Facebook profile picture, was fairly difficult. There’s not much wriggle room when you’re only allowed a certain amount of time allotted by radio stations, and it is doubly hard to stay true to your brand and message and still get what you want creatively, in such a small space.

Assumptions of what audiences respond to are not always correct: The KashFlow foray into radio started with two scripts to choose from. 1) A 30 second journey of one business owner and how their lives can be much improved with KashFlow’s easy accounting software. Or 2) A poem that not only rhymed, but also spoke to lots of businesses, who were singled out as having the most to gain by trying KashFlow. Both nice concepts, yes? So what would you choose?

We chose #1, with a belief that by making the journey personal to small business listeners, we’d get a better result.

Turns out, going with a gut decision is not always the right path, and after a test drive of this journey-based radio ad (and a lot of asking around of what other people would prefer to hear) we decided instead to continue our radio campaign with the poem. It was an interesting lesson in how assumptions can stop you from really relating to your audience and in hindsight, the rhyming quality of the poem, the retention of the message and the relatability of a much larger audience was a smart move.

“Assumptions can stop you from really relating to your audience.”

The things you don’t think about can pose a real challenge: You’d think that after choosing the right script (and even spending hours deciding which small businesses to include in the poem) and finalising a call to action, and getting that all done within 30 seconds, we’d be free and clear to take on the airwaves. However, an obvious issue that had the potential to be a real stumbling block was our name. KashFlow (with a K) dot com. It’s something you don’t have to worry about when writing Twitter adverts or Facebook posts, because visually it is relatable. Selling this to an audio audience was something altogether more complicated. Spelt with a ‘C’ meant running the risk of diverting our target audience to another website, so exactly telling people about the ‘K’ in KashFlow was ultimately the only logical way to get around this.

Listen to the radio ad below:

See how KashFlow can make accounting easy for your business. Sign up today.