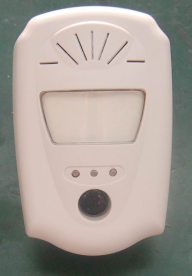 Frivolous blog posts are traditionally reserved for Fridays. But lets have one on a Monday for a change.

Over the weekend I moved into a new house. in a few of the rooms there was an odd device plugged in to the sockets. I had no idea what it was.

The label on the back yielded no clues. It just referenced a website that specializes in indoor water features.

So I posted a picture of it on Twitter and got some humorous responses:

Andy Barr from 10Yetis suggest it’s Mini-stig. That shouts “vrooom” when you walk past it.

HostOrca thinks the Geordie mafia (aka Sage) got to my house before I did and it’s actually a bugging device.

And PaulH says it could be a wall mounted TV for tiny people.

Excel_Expert says it’s an air freshener and the different lights are for different fragrances.

There were also a few boring “CO2 detector” (albeit one to terrify children according to getwired) and “Motion Sensor” suggestions.

My favorite was GuyGregorys suggestion that  it’s a Stormtrooper.

Ed89 almost managed to convince me it was a device for monitoring your power usage, and the colored lights indicate how acceptable your current usage level is.

But the truth was discovered by GarryMumford, GlennBookingBug, GirlCheese and our very own CTO TimMcOwan – it’s actually an ultra sonic rodent repeller.