I came across this post on The Next Web over the weekend and thought it made some interesting points. Recent studies have suggested that, as a society, we’re actually regressing to our neanderthal roots – our compulsions to check our smartphones every five minutes are hindering our empathy and ability to communicate with other human beings. Scary, right? 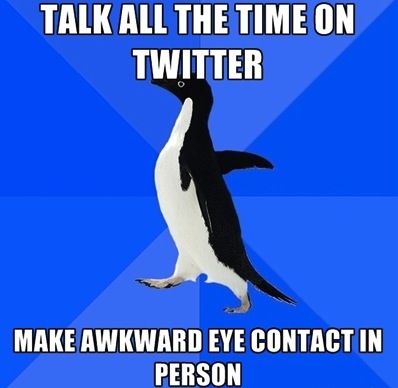 It got me thinking about business and tech events, which are (more often than not) filled with people standing awkwardly, fiddling with a smartphone, not knowing who to speak to. They’re very reminiscent of those school dances where no-one of the opposite sex wanted to talk to you. Unless you were better adjusted than I was at school…which you probably were. Anyway, here are a few thoughts about what to do at events.

‘Dressing for success’ is no longer quite as simple as putting on a suit. After Mark Zuckerberg made it big, a lot of startup founders began to emulate his style (i.e., hoodie, jeans and flip flops) when attending events in London. While I don’t think it’s necessary to go to this sort of extreme, it’s worth pointing out that it’s possible to overdress – for example, if you wear a suit to an informal meetup for startups, it might put other founders off talking to you.

Don’t judge people based on their appearance.

At one of the first events I attended after coming to London and getting into the tech scene, I ended up talking to a very chatty guy who looked like Russell Brand and was wearing a purple velvet suit. At the time, I assumed he was simply a startup guy who was a bit eccentric. I later found out that he runs a massively successful multi-national business…Hint: he was recently on the cover of Wired.

To clarify, this does NOT mean that you should drunk dial your ex and start sobbing on a stranger’s shoulder (a common side effect of alcohol). It means that you should loosen up and be friendly, which is what tends to happen after a couple of drinks, and try to talk to as many people as possible. Even if you can’t see how someone can help your business right now, chances are they might be able to do so in future. If you can help people out, even if it’s just with something small, do it – you reap what you sow!

While you don’t have to dish them out to every single person you see (taking a business card from someone at a urinal is super awkward), it’s nice to have something tangible that you can give to someone you’ve had a good conversation with. I once had a great chat with someone from Moo, only for them to tell me they’d forgotten to bring their business cards. Tsk! Sure, you can just exchange Twitter handles, but everyone knows ‘we’ll catch up on Twitter some time’ is the new ‘don’t call us, we’ll call you.’

Maybe you’re reading this post and chuckling smugly to yourself – ‘I already do all these things, I can’t believe people don’t already know this stuff.’ Well, first off, drop the ‘tude, buddy. Second off, not everyone is a natural born socialista (may have just invented that word) – if someone comes across as nervous, try to put them at ease and just…be nice. Life’s tough enough without people being rude and cliquey at events.

Wait, what? Yes, it’s best to attend events in person where possible, but if you can’t attend it can be really useful to check out some of the conversation on Twitter and make contact with people you were hoping to connect with. And by this I mean ‘Shame I missed you, would be great to grab a coffee to talk about X or see you at a future event!’, not tweeting ‘I WAS ILL TODAY, BUT BUY MY PRODUCT ANYWAY.’ to every attendee.

There’s much more we could say about events, but the best way to get into the swing of them is to go to more of them. And, lucky you, we’re going to be at The Business Show on the 17th and 18th May. Tickets are free, so why not come test out your skills on us? Promise we’ll be nice!