Watch out, ‘the cloud’, your days as a media darling may be numbered – FinTech is the new buzzword. But what is FinTech exactly? Sadly, nothing to do with robot sharks, FinTech actually refers to the current wave of innovation in the sphere of financial technology. Last night a few of the KashFlow team attended a Digital Sizzle, one of London’s most popular networking events created by the founders of Silicon Drinkabout, focusing on why London leads the way in FinTech innovation.

Are we human, or are we FinTech?

On the taxi ride there, we mulled over the subject of whether or not KashFlow fits under the umbrella of FinTech. (‘I hope the bouncers don’t refuse us entry for not being FinTech enough.’) It’s difficult to reach a conclusion about whether or not KashFlow is a FinTech startup because there isn’t really an established definition of what FinTech is. To my mind, it’s enough to say the following about FinTech –

An innovation, scheme or product that aims to impact on the way ‘money’ is exchanged.

Of course, ‘money’ is a subjective term – it might apply to credit, virtual currency or any number of different things, but as a working definition I think this is ok. I also think, given our focus on automation, that we count as FinTech. Fortunately, there were no bouncers anyway. Though our CEO did almost get rough-housed for managing to smuggle a beer outside. 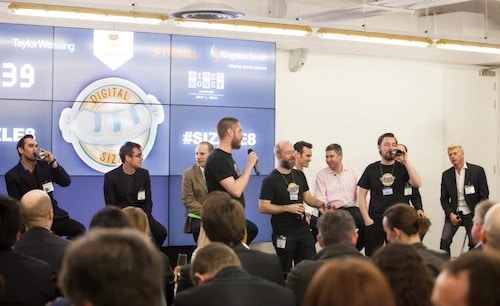 With such a huge panel, it was difficult to keep up with who everyone was (I’m bad with names at the best of times…) but the discussion touched on a lot of issues close to the heart of entrepreneurs and small business owners – investment (like SEIS), crowdfunding and the role of banks were all hot topics. I’m presuming that all the cameras there mean that footage of the event will surface at some point, and will consequently be added to this blog, so rather than trying to cover everything here I thought I’d comment on a few thoughts the event raised.

One issue that came up in the Q&A was the subject of Bitcoin. For any who don’t know, Bitcoin is a controversial (particularly because of its ties to the online black market known as Silk Road, where guns, drugs and even assassins are only a few clicks away) online currency that is, supposedly, anonymous. However, as disruptions like Bitcoin emerge, so do attempts to police them – panelist Jack Gavigan spoke of measures to drill into transactions involving the conversion of Bitcoin into USD that are above a certain amount or are ‘suspicious’. While it’s true that anonymity is a powerful weapon, it’s certainly not up to me to tell you whether or not measures like these are a good thing – they probably depend, to a certain degree, on just how much of an anarchic streak you have!

While the polarisation onstage between bankers (poor Alex Scandurra and Joe Smart…) and startup founders seeking to disrupt the status quo was pretty clear, the feeling that collaboration was possible was definitely in the air – when the audience was asked if they’d do business with banks, or like to have banks as a client, at least 50% put their hands up. It isn’t too difficult to imagine a world in which all those cryptologists and programmers (let’s move swiftly on before we realise how out of my depth I am…) that have spent the past few years going to work for Google instead of getting into banking could be won back by banks who want to shake things up with rapid technological innovation.

Our own Duane Jackson, to a chorus of cheers I might add, raised the issue of open APIs with banks and why they have yet to appear. Gavigan’s reply was certainly food for thought – he pointed out that, once upon a time, people would check their bank balance five times a week at the cashpoint. With the dawn of internet banking, this rose to checking five times a day. With mobile banking now firmly in place, this is getting closer and closer to fifty checks a day. Could all that old bank technology really handle all those API calls? Of course, never one to settle, Duane pointed out that half the people in the room could probably address that issue with software solutions…

The issue of whether or not London really is the capital of FinTech is largely irrelevant – ongoing competition with Silicon Valley and other tech hubs isn’t particularly conducive to actually getting stuff done. However, it’s worth noting that of the several Digital Sizzles I’ve attended, this was by far the most well attended and had the most engaged audience. It’s clear – London loves its FinTech.

Since the age of about 15, Fight Club has been one of my favourite films – I can think of few cinematic moments more powerful than Tyler/Jack and Marla watching skyscrapers, synonymous with banks and financial institutions, coming crashing down around them. However, the viewer is very much aware that this is ‘the end’ – if such a thing WERE to happen, what would come next? At the time of the movie’s release, a new beginning was all but unimaginable. Now, just over a decade later, FinTech hints at the possibility of a future beyond credit cards, beyond banks and, potentially, beyond money.