Last year, we ran a large scale advertising campaign made up of a number of different elements.

One source that performed much better than we were expecting was Spotify – we tracked a substantial amount of trialists and experienced a lot of positive interaction on social media while the advert was running, not to mention the fact that it also impacted on search by name and brand awareness (albeit that’s a bit more tricky to measure…).

However, another element of the campaign was Facebook advertising and, as the title of this post suggests…it sucked.

Ok, I’m being glib, but the following numbers sort of speak for themselves –

Considering the fact that we implemented some pretty specific targeting, and tried several different ads, a CTR of just under 0.02% is not great. It’s not too far off the sort of CTR you might expect when taking out display advertising, but display advertising rarely offers the ability to target as precisely as Facebook.

It’s worth observing that the (relatively) recent introduction of ‘Suggested Posts’ attempts to address the issues that we, and many other advertisers, have experienced with advertising on Facebook – images the size of a postage stamp on the sidebar of a website don’t exactly make it easy to create something distinctive and eye catching. 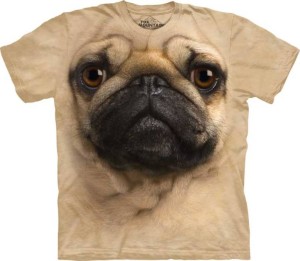 However, I recently noticed a Suggested Post from Fab.com featuring the t-shirt pictured on the left. Not only had the post accrued a huge number of likes, it had also been shared by hundreds of people. Of course, when this pops up in the newsfeeds of a sharer’s friends it converts the post from an advertisement into a recommendation from a friend – Facebook uses the same tactic when pointing out that ‘Your friend X likes this’.

It’s difficult to get away from the fact that Facebook isn’t somewhere people go to be sold to. Unless they manage a page for a business themselves, it’s unlikely that they’ll ever sympathise with a brand or product that’s appearing somewhere that they don’t it want to – you don’t have to watch your newsfeed for long to see Suggested Posts (that are less visually appealing than Fab.com’s efforts) being blasted by people who want it out of their feed.

If you’re selling a product that’s visually intriguing or exciting, or a low value ‘impulse buy’, Suggested Posts seem to be a great way to go. However, if you sell high value products or subscription based services, you might want to think very hard about whether or not Facebook advertising is going to deliver what you want it to.