I received an anonymous letter yesterday.

It was a bit underwhelming at first due to the lack of letters cut out from newspaper headlines. But after I read through it, I realised it was potentially pretty explosive stuff.

Essentially it was copies of letters sent at the end of last year from “Concerned Business Managers” at a well-known bank, sent to their MD.

There were a lot of claims about dodgy practices at the Bank, but there was one particular area that interested me (which is probably why I was sent the letters).

I’ve said for a long time that banks are mis-selling Sage to their business customers. The software is far too complicated and confusing for their needs (as it was for mine 6 years ago, hence creating KashFlow)

Below is a scan of one of the letters that, if legitimate, confirms what I’ve been saying. In fact, it’s worse than I’ve been saying. It claims that of all the Sage boxes sold, only 20% are actually used. I’ve spoken to plenty of KashFlow customers that felt they were tricked into buying Sage and were stuck with a monthly fee they couldn’t get out of.

I’ve redacted anything that identifies the name of the bank (for all I know these could have been sent to me by a total nutter that has nothing to do with the bank). The redactions in green refer to a Sage product the bank sell to their customers. 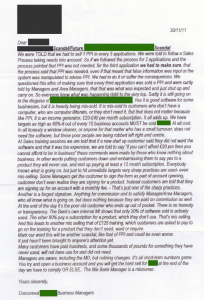 Make of it what you will.